Posted on May 5, 2018 by thirteenvegetables

I have not been very good about keeping the blog updated. But I recently posted a bunch of short videos, highlighting different aspects of the garden. Whether you want in-depth information about a certain subject or just a quick tour of the garden, check out my new YouTube playlist:

Posted on May 5, 2018 by thirteenvegetables

When I moved to South Seattle 12 years ago, I started commuting to work by bus. My daily walk to the bus stop would take me past a little triangle of no-mans land, edged by an intersection and the fence of the next house. Once, somebody had made an effort to plant Rugosa; but now it was covered in blackberries and passers-by thought nothing of tossing their trash into this unloved wasteland. I had a better idea: plant a little public garden for all to enjoy!

7 years later, the garden has gone through many transitions: the original idea of a food forest with lots of annual vegetables gave way to a design centred around fruit trees and perrenials, which has proved much more manageable and suitable to the site. It requires little maintenance and yields more harvests from year to year. This little urban orchard has now grown out of its ugly teenage years – when the tiny trees were hardly visible and it seemed like a haphazard collection of random growth – and matured into something quite beautiful that even the untrained eye can appreciate. The discarded food wrappers have been replaced by appreciative comments; and when all the plums disappear off the Shiro tree in summer, I think of it as a sign that the Brandon Triangle is no longer an eye-sore but an asset to the neighborhood.

Soon I will be leaving Seattle and would like to pass on the stewardship of the orchard to others that love trees and know how to take care of them. If you live in South Seattle and are interested, take a look at the videos that I have posted on Youtube:

If you would like a site tour you can get in touch with me at patrickmann@hotmail.com.

Posted on June 4, 2014 by thirteenvegetables

Our garden is in a very public space and lots of people walk by daily. Whenever I am working in the garden I get curious looks and sometimes questions about what we’re doing. A permaculture orchard does not conform to the common ideas of what a park or community garden looks like – so people have a hard time understanding the concepts and goals of the project. Many are hesitant to venture inside and look around.

Now City Fruit has helped me create a flyer that describes the ideas and goals of the garden in a very accessible and engaging way. What’s more, they are providing a leaflet holder that we can put up near the sidewalk. It’ll be interesting to see whether that changes the perception of the garden; and possibly draws in some more participants.

Here’s the draft version of the flyer – what do you think?

Posted on June 2, 2014 by thirteenvegetables

Hugelkultur is a variation on a theme that has been around for a very long time. The traditional Huegelbeet or Hochbeet aims at improving the soil and microclimate, incorporating not just woody material but also plenty of leaf mold and compost. Hugelkultur, popularized by permaculturists in the US, relies primarily on large diameter wood to act as a sponge for water and a substrate for beneficial soil fungi and microbes.

In Seattle – contrary to popular belief – we are challenged by an extremely dry summer period July through September. Combine this with the extravagant prices of city water and you are highly incentivized to adopt gardening techniques that reduce the need for irrigation. I am using a modified version of Hugelkultur in an attempt to create more drought-tolerant garden beds. The main features are:

Additional benefits, beyond reducing the need for irrigation, are

Here’s a photo-sequence of the bed we built this weekend to plant popcorn.

Cover with the topsoil previously excavated

Posted on May 28, 2014 by thirteenvegetables

Growing fruits and vegetables is a challenging business – not only when pushing the boundaries of your climate zone, but even when growing the most mundane of crops. This year, the weather has been quite favorable, but I learnt more about insect, fungal, and bacterial diseases than I would have liked.

It’s always frustrating to see a plant struggle or die, that you have been lovingly tending for weeks and months. But, difficult as it may be, you simply have to chalk it up as a learning experience and move on. I’ll admit that I am still struggling to develop the proper gardening equanimity. Here are some of the things I learnt this spring. Peach Leaf Curl is a fungal disease. Spores infect the buds of new growth – by the time you see the typical red patches and deformed leaves it’s already too late. Infection and growth of the fungus is promoted by cool moist weather – almost all peach trees in the PNW suffer from this disease.

On the bright side, while it weakens the tree it will not kill it. Remove all infected material as soon as possible to prevent spore formation and re-infection; keep the tree well watered and fertilized to help it recover; prune to allow more light and air penetration.

Despite the similar names, this is very different from Peach Leaf Curl. Plum Leaf Curl is caused by aphids. They attack the new growth causing it to curl and shrivel.

Unlike fungal diseases, aphids can be combated by encouraging their natural predators, e.g. Ladybugs. Of course, that means allowing the pest population to grow until the predator population ramps up to match it.

Physical measures such as soap spray or removing affected leaves will slow the aphids down, but aren’t sufficient to eliminate them.

Pear trees – and apples to a lesser extent – are afflicted by fungal black spot disease. Left unchecked, it can defoliate the tree. The best way of dealing with this is removing affected leaves as early as possible to limit the spread.

Cedar rust is another fungal disease common in the PNW. Its host plants are cedar and juniper. Since these are ubiquitous, you have to accept that susceptible varieties of apple and pear will be affected every year. Manual removal of affected material is again your best bet for limiting the spread of the disease. 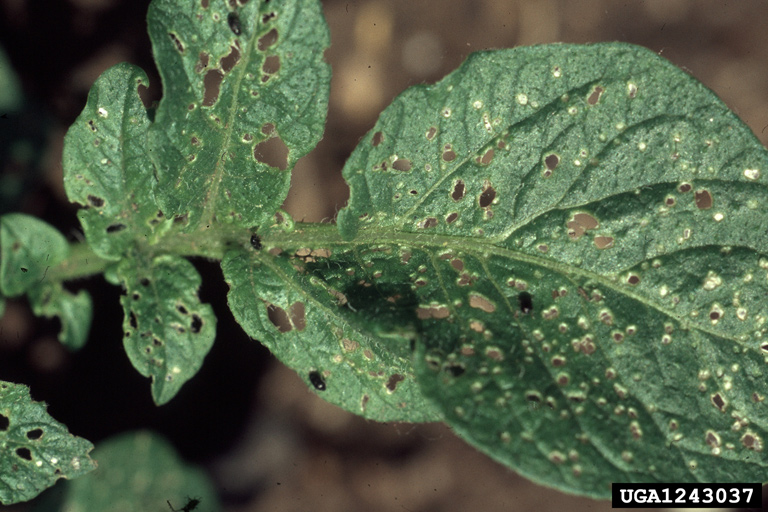 Flea beetles were unusually bad this year, particularly on our potatoes. Generally we’ll just see a few holes in the leaves which don’t impact the plants significantly. This year, plants are seriously weakened and stunted.

Natural predators like the Soldier Beetle are your ally. Additionally, you can disrupt the soil-dwelling larval stage by cultivating around the affected or susceptible plants. Floating row cover can also prevent or limit Flea Beetle damage.

Cane borers drill holes in the branches of fruiting currants to deposit their eggs. The hatching larvae eat the soft tissue inside the cane, causing it to break.

SWD, a type of fruit fly, only recently arrived on the scene. It was first detected in Washington around 2010. There has been little time to study its behavior and life cycle, and to identify effective management strategies. Unfortunately, it looks like it is here to stay and will pose a major headache:

What can you do? At this time, physical control is the best option. Completely enclose the fruit or plant in fine mesh, e.g. pantyhose, paint strainer, or organza fabric. The tricky part is to wait until after pollination, but before SWD is active – that is a short window of time.

On the bright side, SWD infested fruit is not toxic. If infestation is not too severe, you may still want to use the fruit for juice, jam, etc.